In Flight With My Turkish Prima Donna: The Little Sparrow

I got out of the bus that brought us to JFK in New York. After weeks of travelling with the Sezen Aksu Acoustic 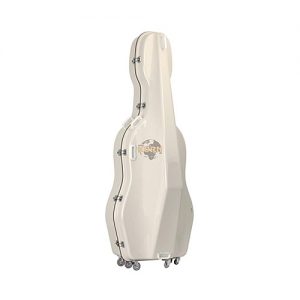 band I was on my own again. I wheeled my Double Bass flight-case into the Odd Size Luggage Office and I was alone. Everybody was heading back to Istanbul, Hanover Germany (Mustafa Boztuy) 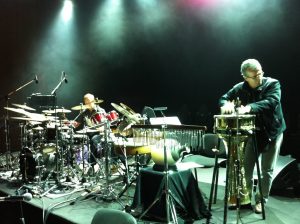 or stayed in the US for some time- the lot. I went back to Amsterdam. Needless to say travelling with a 55 kg case that doesn’t fit in any van is troublesome. It wasn’t long before I started to use my electric upright for the Sezen gigs. I had a smaller and little less heavy case that made travelling easier. Plus we played for huge audiences. That means that an acoustic double bass can’t define the low end as it should. It’s all simply too loud! As soon as my man Jarrod hit the Bass Bendirs and the other 2(!) percussionists would start to hammer their drums; my acoustic bass would produce the biggest “whooing” sound of feedback possible. Our front of house mixing engineer Serdar Altincisme needed control over the low end and he’s an integral part of the team. You don’t mess with him: he’s probably the most demanding and professional mixing engineer I’ve ever worked with (and I met a few!). Having worked with some of the greatest demanding artists like Miles Davis, Keith Jarret, U2, Foo Fighters etc. he knows how to deal with high volumes and keep everything clear.
I had bought an electric upright for a few hundred euros with the name Bass Stud – what’s in a name-…. Of course it wasn’t working the way it should since the pick ups had been placed way out of line: no bass in that bass. So I started to change a few things of that instrument; switching pick ups for a deeper bass sound and putting them on the right spot according to the placement 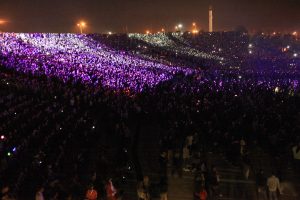 of the strings. It worked fine for a while. Until we played at the edge of the Bosphorus on an open air gig. The crowd was wilder than wild and kept singing Sezen songs long after we had stopped our hard rocking gig. But during the whole gig I could listen to BBC World Radio that came through my bass and strings and was amped into a 810 Ampeg stack. Both Jarrod and I could enjoy the radio while Sezen was talking to the audience and we didn’t play. That’s not really a problem when it remains on stage, it’s just annoying. But when the FOH gets the same signal it’s a bit different. Serdar came after the show and said I need to get a new solid bass.  It was great when I asked him what he thought I should buy as a better/professional electric upright. He simply replied: I’ll check things out. Next gig he came and said: buy this one: the specs of this instrument fit your style of playing best. 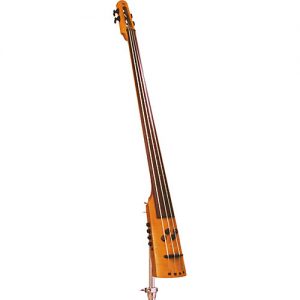 And I could not foresee how right he was. If I had had the NS Electric Upright 25 years ago I would never have played anything else. It’s a deliciously delicate and extremely versatile bass with clarity on the whole fingerboard – most of the times basses have serious dead spots where notes drop dead spontaneously. And the “good old days” of bass feedback were completely behind me.  On stage nobody would look over his shoulder anymore where a feedback occurred…. 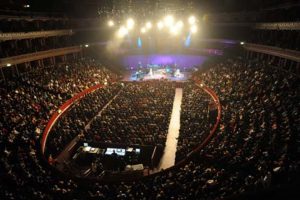 We had a songbook containing hundreds of Sezen’s songs. She’s been around since the early 80’s and always has been writing her own material.  Often she’d write hit songs for others like Tarkan and assumed rightfully so that the whole band knew all her songs. But it was a lost battle from the start.  It happened more than once that she’d start to sing a song which both Jarrod and me had never heard before. And there would be 5ooo people singing the song as if it were the first words they’d ever spoken…. We’d look to each other in an expression of “here we go again” and would follow the singer…. “bloody following” is the Turkish expression for playing like that. Turkish muso’s marvel at that.  We managed to get it reasonably well to the end most of the times though. The most important thing of being a musician is to have big ears: not necessarily in all details but outlines of song movement and harmonic structures.

We played huge audiences, sometimes to 40-50.000  and Turkish stardom meant we were always placed in 5 star hotels flying in and out of anywhere anytime. The crew consisted of over 28 people that were  always(!) in the same hotel as Sezen. No need to say it was a hell of a job to make money for any organizer in any place any where. 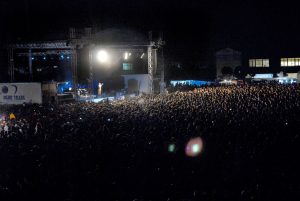 The musicians got to be friends, some very good;  some a little reserved but always very respectful; we were a good band of brothers. I’ll cherish the moments that were glorious and full of joy; when music, drama, cultures and minds came together. But it wasn’t all great. Sometimes alcohol and drugs took the proper direction and perspective away from the band. At times shows would last for hours extra because of endless talking and way too little music. A few times organizers even put on the lights in the hall because the audience needed to be given the chance to get home in time or catch the last public transport available. I don’t think we ever played a given set list from top to bottom; there were always changes in the middle of the gig or skipping the last songs because Sezen couldn’t or wouldn’t go on no more. Sometimes it was not so cool.
We started out with the feeling we’d be able to make this a great strong band comparable to Peter Gabriel’s band. In the beginning when we only played as an acoustic band, we had a strong competitive spirit and rocked the stages. It was a full blown Rock ’n Roll experience when we managed to bring the music to such a high level that we became known as the best band Sezen ever had.

time in Turkey to develop my language skills onto a decent level. It didn’t help that I could speak German with Mustafa, French with Goksun Cavdar and English with Jarrod & Fahir and most of all my dear friends Alp and Riza Okcu from StageArt- the booking agent and producer of the project.

In the years this band worked we grew to be close friends and while writing this I know an awful lot has changed in Turkey lately. The freedom which was emerging when I came to Istanbul for the first time has slowly been replaced by repression. Decades ago it was the army- a military state; now it’s Erdogan ’s conservative Islamic ruling that strikes hard among creative minds and arts. It’s no difference to be bitten by a dog or a cat….
Riza always had a strong opinion on many things. He’s a mastermind and knows a lot about geopolitical issues.  He’s clever, funny, direct and generous. He’s a great musician and producer too -he remixed and reworked the whole recorded Sezen Aksu repertoire prior to our project. He really knows his shit. Many times he’d pick me up at the airport and we’d have to eat first. Being someone who really likes good food, Riza introduced me to the best of the Turkish cuisine. He taught me the different flavors and which was the best place to eat what. We shared many bottles of raki (and Hefer Weizen in Germany)and he was the one that introduced me there. He’s a truly remarkable friend.
It’s been over two years since I was with them in Istanbul but my gratitude to be part of this thing remains… it was just awesome!